"The Village With A Vision"

“The Village of Lincoln is a family-oriented, safe and friendly modern lake-side community with an attractive streetscape and prosperous business district providing environmentally friendly recreation and entertainment opportunities for residents and visitors of all ages." The Village of Lincoln Planning Commission and the Village Council are holding a Public Hearing on Monday January 30, 2023 at 6p.m. at the Lincoln Fire Hall/Village Office Building located at 117 W. Fiske Street.  We are holding this hearing to gain input from residents of the Village of Lincoln as well as residents of Alcona County on their thoughts regarding a proposed Community Hub to be located within the Village Limits.  We are considering whether to change verbiage that would allow Town Homes and Condominiums to be built within any B1 district.  It is important for you to voice your support for this project or to voice your opposition.  If you are unable to attend this meeting but are interested in sending a letter you may either email it to the following email address: villageoflincolntreasurer@gmail.com or you may submit a letter to Village of Lincoln Attn: Ordinance Change P.O. Box 337 Lincoln MI 48742.

Click here to download the fence picket form. Each personal fence picket is $25.00 and will go to help keep and maintain the flights of imagination playgrou.d

The Village of Lincoln is seeking an Attorney to attend to the business needs of the Village.  The person would need to attend monthly meetings to advise on any legal issues that may arise.  Additionally, any other legal matters that need attention would need to be taken care of by the Attorney.  Any questions should be directed to Sheila Phillips, Village President at 989-335-0012.

The vision for the village of Lincoln, located in Alcona County Michigan, began with its settlement in 1885. It is believed that the site was chosen because of the twin lakes, Brownlee and Lincoln, which surround the village. Lincoln Lake would eventually serve as an integral instrument for the logging industry, as it was used to transport lumber to a nearby train depot for the Detroit and Mackinac Railroad. The area was platted in 1886 by A.J. Freer, a surveyor hired by Alger Smith and Company.

The platting was unique in that it contained property in both Hawes and Gustin Township, with the village originally called West Harrisville. With the Local Act of 1907-No. 575, Gustin and Hawes Township incorporated the north half of section one, in town twenty-six north, range eight east, and the s ½ of section 36, town twenty-seven north, range eight east, as the newly named Village of Lincoln.

The first election to establish a village government was held on March 19, 1908. The council consisted of W.G. Anderson, president; Charles W. Schram, clerk; Peter LeCuyer, treasurer; Lorenzo L. Mills, assessor; Mack Apsey and T. A. Ferris, trustees. One week later the first council meeting was held with meetings to follow on the first Monday of each month. The council strove to make many improvements in the village; such as generating funds for a dock structure on Lincoln Lake, creating a village park for camping and picnics, and installing sidewalks in the business district. Throughout the years Lincoln has continued to grow, and is now called home by 374 residents. The area consists of a close-knit community with thriving local industry, restaurants, gas stations, grocery store, fitness facility, post office, hardware, laundromat, drug store, car dealerships, banks, library, churches, Commission on Aging Center, and K-12 school. Lincoln also offers year-round recreation including cross-county skiing, snowmobiling, hunting and fishing. As we continue to improve the Village of Lincoln, we invite you to share in our vision, visit our village for one of our events, or become a part of our community. 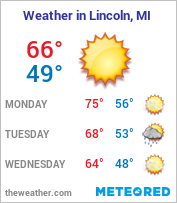